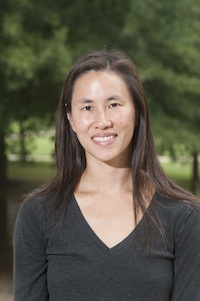 Adriane Fang is a dancer, teacher and choreographer with a keen interest in multi-disciplinary collaboration.  She was a member of the internationally renowned dance company, Doug Varone and Dancers, from 1996-2006 and has worked with several other choreographers including Colleen Thomas, Bill Young, Wally Cardona, Christopher K. Morgan and Nancy Bannon.

She has been a guest teacher at Taller Nacional de Danza – San José, Costa Rica, Indiana University and the Damansara Performing Arts Center in Kuala Lumpur, Malaysia and has taught and staged the works of Doug Varone for various universities and companies, including North Carolina School of the Arts, CityDance Ensemble, BalletMet Columbus, Juilliard School of the Arts, Ohio State University and the University of Minnesota. She was on faculty at George Mason University from 2006-2009 and at the Doug Varone and Dancers Summer Workshops from 2000-07 and 2015-16.

She has choreographed dances for groups such as Compañia Ceibadanza in Ecuador, ClancyWorks Dance Company, Shendandoah University, James Madison University, and was awarded a 2014 Local Dance Commissioning Project Award from The John F. Kennedy Center for the Performing Arts to present her full-length work, Grains.

Currently on faculty at the University of Maryland, Adriane is the recipient of a 2007 New York Dance and Performance Award (“Bessie”) for her performance with Doug Varone and Dancers.