The doctoral program in theatre and performance studies is an interdisciplinary course of study that prepares students for careers as educators, professors in higher education, publishing scholars and cultural critics. 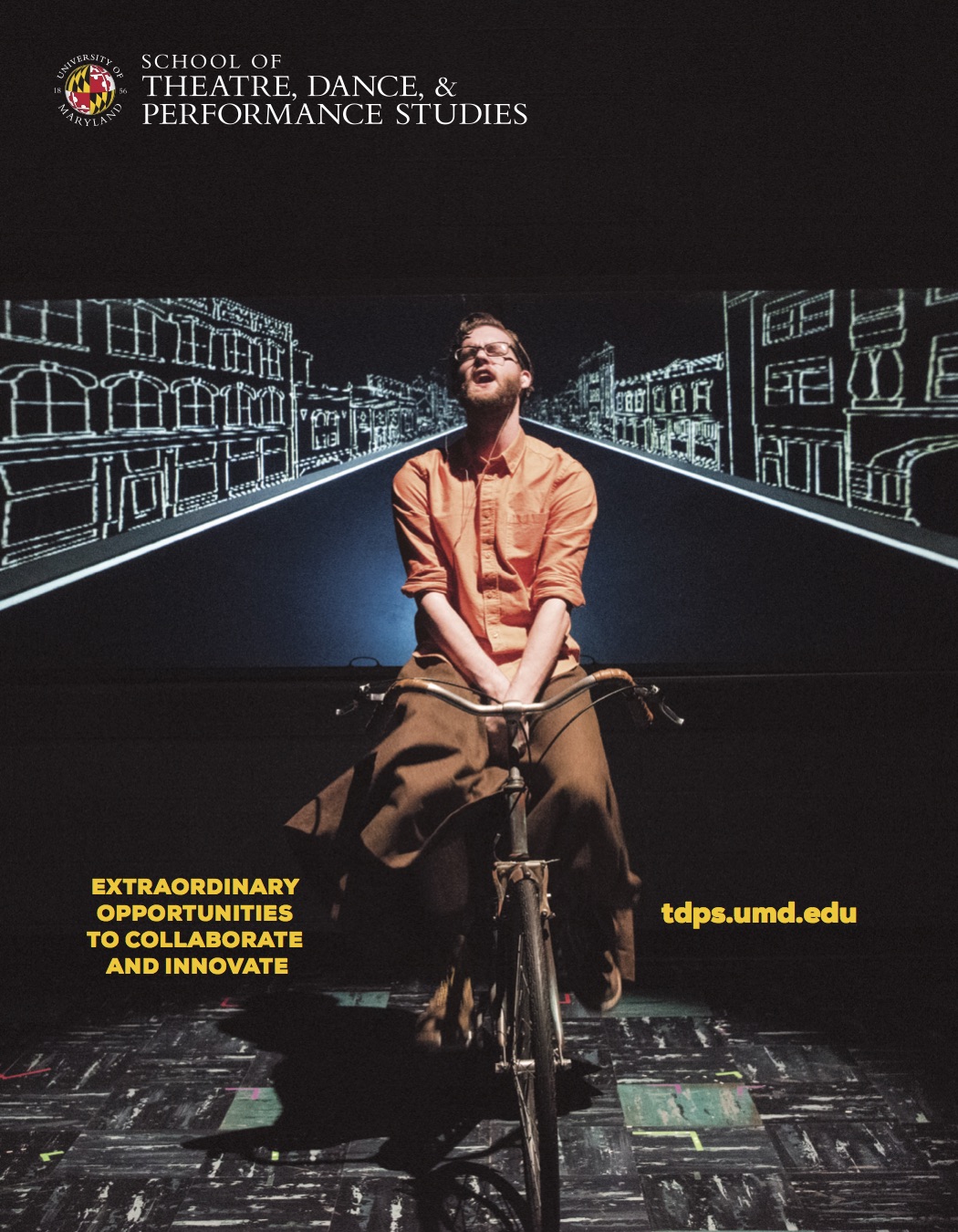 Take a look at our TDPS Brochure

The doctoral program offers a rigorous exploration of both theatre history and performance studies through the critical analysis of archival histories, theoretical approaches and performance texts relevant to these interrelated fields.

Applicants who do not hold an undergraduate or graduate degree in theatre (or an equivalent field) may be required to take preparatory coursework prior to admission into the Ph.D. program.

If you would like to visit the University of Maryland to learn more about our program, please contact:

The Ph.D. in theatre and performance studies program starts each year in the fall, with an application deadline in January or February. This year's deadline is Friday, January 19, 2021. Please see the information below to prepare for the Fall 2020 application. For additional information, please contact:

As required by the Graduate School, all application materials are to be submitted electronically:

The electronic submission of application materials helps expedite the review of an application. Completed applications are reviewed by an admissions committee in each graduate degree program. The recommendations of the committees are submitted to the dean of the Graduate School, who will make the final admission decision. Students seeking to complete graduate work at the University of Maryland for degree purposes must be formally admitted to the Graduate School by the dean. To ensure the integrity of the application process, the University of Maryland authenticates submitted materials through TurnItIn for admissions.

Please be sure to include the following in your application:

The University of Maryland is dedicated to maintaining a vibrant international graduate student community. The office of International Students and Scholars Services (ISSS) is a valuable source of information and assistance for prospective and current international students. International applicants are encouraged to explore the services they offer and contact them with related questions.

The school is committed to fully funding all graduate students accepted into its programs and makes every effort to meet that goal. If you are unable to pursue your education without financial support, check the appropriate box on the application form and note this in your statement of goals, research interests and experience.

Some types of financial aid for outstanding students, such as the Flagship Fellowship program sponsored by the Graduate School, must be applied for by the school on your behalf. To be considered for these special awards, we recommend you complete the application process by December 15th.

Fellowships can provide full-time funding for up to two years and include:

Assistantships can provide full-time funding for up to four years for Ph.D. students. Full assistantships require 20 hours of work per week and include:

Half assistantships (10 hours of work per week) are also offered as supplements to other forms of funding.

Loans are arranged through the Office of Financial Aid and can be subsidized or unsubsidized. Please visit their website for criteria and deadlines.

To find out about other funding opportunities, please visit the ARHU website page for fellowships, grants and awards.

For questions related to the admissions process, prospective students may contact the Graduate School.

If you have any questions about the Ph.D. in theatre and performance studies program or application, please contact the head of the program, James Harding, at jharding@umd.edu.

The Ph.D. program in theatre and performance studies is designed to be completed in four years of full-time study. If necessary, students will be assisted in applying for funding from other sources to cover additional years.

The program requires a minimum of 58 credit hours beyond an M.A. or M.F.A. degree, 40 hours of which must be taken on campus. Students are normally advanced to candidacy in their third year, at which point they are classified as ABD (“all but dissertation”). This timeline must be followed for students to be classified as “making satisfactory progress” towards their degrees. The Graduate School allows up to a total of five years to advance to candidacy. Failure to advance within five years will result in the student’s removal from the program. Students who must extend their time to advance to candidacy are advised to check the “Full-Time Status” section for the website of the Office of the Registrar to see the difference between course units and course credit hours to ensure they do not fall below full time status.

The Graduate School also requires that a Ph.D. be completed within nine years of entry into the program. After nine years, credits earned from coursework are invalidated and the student must start over. In certain circumstances, students may apply for a one-year extension, and may apply for this two times (thus allowing a maximum two-year extension). If two extensions are requested and granted, this could potentially allow up to 11 years to complete the degree.

View the one-page course description and credit requirements for the Ph.D. in theatre and performance studies program.

For details about coursework requirements, please see the Ph.D. in theatre and performance studies handbook.

For details about comprehensive exam requirements, please see the Ph.D. in theatre and performance studies handbook.

For details about qualifying exam (literature review and prospectus) requirements, please see the Ph.D. in theatre and performance studies handbook.

For details about dissertation requirements, please see the Ph.D. in theatre and performance studies handbook.

View the Ph.D. in theatre and performance studies handbook.

The research expertise of our affiliate faculty brings a deeper understanding to histories and theories of performance, art and culture. Affiliate faculty collaborate with our TDPS faculty through classes, academic talks, seminars, post-show talkbacks and other events. They may also serve on graduate thesis and dissertation committees.

Advocating and Agitating, Connecting and Inventing

In a Virtual World, Students Get Personal with Visiting Artists

This Fall, the Performing Arts at Maryland Come to You