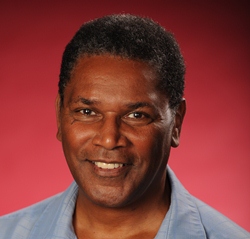 Alvin Mayes’ research involves making dance for diverse communities and creating music for theatre and dance. In summers 2012 and 2013, he was invited to work with Compañía Ceibadanza in Manta, Ecuador. The residency included community engagement, master classes for the youth dancers and using dance to promote the industry of Manta. His dance, LOS OJOS SOBRE MANABÍ, was accepted in the adjudicated XI Festival Internacional “Fragmentos de Junio” 2013 in Guayaquil, Ecuador. His return in summer 2013 was supported by a grant from the Greenbaum Charitable Foundation to specifically create a new work ESCENAS DEL OESTE for the youth of Manta.  He received another grant Spring 2021 from Greenbaum Charitable Foundation to create CHASING THE MOON/CROSSING JORDAN, a short dance film for dance alumnus Atlas Hill.

Mayes specializes in Partnering, Choreography, and Performance Coaching for dance.

Mayes works regularly in the region with the Maryland Youth Ballet, The Bender Jewish Community Center, Montgomery College in Rockville, Northwestern High School Center for Visual and Performing Arts, and the Maryland Council of Dance.

Mayes has created more than 150 works on students at The University of Maryland. Some of these works were performed at V Festival de la Cultura de Origen Caribeño in Santiago de Cuba, at the Port Sisters City Festival in Nagoya, Japan, avant-garde steirischer herbst festival in Graz, Austria, many festivals in the mid-Atlantic region of American College Dance Association and the Choreographers’ Showcase.

Mayes has worked collaboratively with Theatre Professor Scot Reese for a number of TDPS productions: this season’s LITTLE WOMEN: THE MUSICAL, the 2019 Season’s FLYIN’ WEST and other seasons: THE WILD PARTY, THE ME NOBODY KNOWS, IN THE RED AND BROWN WATER, THE COLOR MUSEUM, and SOPHISTICATED LADIES; and off campus for FREE TO SING! for the opening of the Music Center at Strathmore, Rockville, Maryland.

For the 2018 season, he choreographed LITTLE SHOP OF HORRORS directed by Ron Hines.  In 2016 he was the movement coach for GOOD KIDS by playwright Naomi Iizuka, directed by Seret Scot.

At the Bender Jewish Community Center in Rockville, Mayes worked with a team of students preparing them for the Maccabi Games, which were held in Detroit, MI, Costa Mesa, CA, Miami, FL, Memphis, TN, New York, NY, Houston, TX, and Rockville, MD.

He has made new works regularly for Montgomery College in Rockville since 1985, collaborating with composer Bernard Meiterman in 2013 for SHADOW OF THE SHADES and 2016 for HARBOR ME, and with Jeffrey Dorfman for FROM THE STOOP 2014 and SILENCIO DE LA NOCHE 2017; in 2018 and 2019 Mayes composed his own scores for his choreography.