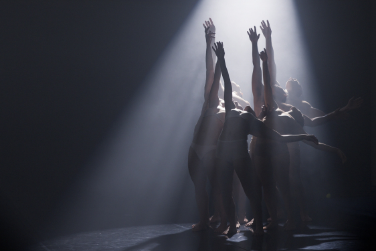 Through his creative process and the performed works of the company, Ieremia’s choreography challenges notions of masculinity in Pacific Island culture.

“I was really surprised by the speed of the class...I’m a slower mover, so it was challenging,” said Kevin Romea Ortiz, a junior dance major and secondary kinesiology major.

During the last portion of the class, Baron taught students a segment from the company’s dynamic work, “Crying Men.” The material taught to students focused on culturally specific gestures and rhythmic patterns from Samoan tradition, blended with contemporary dance movements.

“I really liked how the company incorporated the Samoan culture into the class...it’s really cool how you can bring stories to life through dance,”  said Eleanor Baker, a freshman biology and dance double major.

“I loved learning the phrase and pushing forward through it. I really appreciated learning a phrase from the piece [‘Crying Men’] so that later, when I saw the show, I could see [the dancers] embody it,”  said Miriam Wallberg, a junior early education and dance double major.

The full company, Ieremia, five female dancers, four male dancers, and one musician, performed a version of “Crying Men” along with several other pieces of company repertoire, in the Kay Theatre of The Clarice on Thursday, Oct. 24.

After their performance, the theatre was abuzz with excited chatter, in response to the company’s precise execution of the choreography, and the high caliber of their dancing.

“It was thought provoking, riveting...so precise yet elegant at the same time. The mix of styles was something I wasn’t expecting...I wish I could go to New Zealand and see them again,” said Nana Edu, a senior dance major, after seeing the company’s performance.

“I really enjoyed the show. I was struck by how the dancers were so grounded in their movement, and by the rhythmic complexity of the choreography,” said Hana Hue, senior dance and theatre double major. “They had really intricate rhythmic phrases, and then would move in canons and alternating groups, which added more complexity.”

Miriam Wallberg, a junior early education and dance double major, was also impressed with the performance. “It was incredible...they were so strong...so sharp and together,’” said Wallberg.

Throughout the week, Neil Ieremia, Founder and Artistic Director of the company, gave more insight into Black Grace’s creative process, at The Clarice’s Arts Citizenship Talks (ACTnow) for 2019-20 visiting artists, and a post-performance Q&A.

“...I really wanted to explore this concept of Pacific Islander masculinity…I wanted to put it forward. I wanted to begin a discussion,” said Ieremia.

Ieremia grew up in Porirua, which is just outside of Wellington, New Zealand’s capital city. “It’s not the easiest place to grow up. All of those stereotypes of masculinity there are firm and are held,” said Ieremia.

He said: “Porirua is a rough area. Predominantly Māori [the indigenous people of the island] and Pacific Islanders…my parents...wanted us to be raised...a very ‘white’ New Zealand way. That caused a lot of angst and difficulty for me growing up.”

Ieremia spoke in more detail about how the examples of masculinity throughout his life were ”muddled,” and “taken from a traditional Pacific Island culture, that sort of warrior led place.”

“We [the males] used to call each other ‘black’ in high school...we’d say that to each other when we did something that was brave or daring,” said Ieremia. “The word black for us holds a lot of what we call ‘mana’, or pride...so, when I was thinking about a name to call my dance company…‘black’ was part of that.”

Attaching ‘grace’ to the name suggests a broader range of inclusion within ideas about masculinity, including the matriarchal heritage of Samoan family structures. Samoa was “predominantly a matriarchal culture before it became patriarchal...with the introduction of missionaries around 1830,” Ieremia said.

“Crying Men” specifically points at toxic masculinity in Pacific Island culture, and its perpetuating patterns through generations of communities.

Ieremia said the process for the piece began with months of only the male dancers sitting together, discussing their personal histories with masculinity, which at times involved sharing very painful memories.

“I needed to make a work that reflected our experience. We knew we had to go to some really dark places to get the work right,” said Ieremia.

Eventually, the female dancers came into the conversation and rehearsal process.

“You can't talk about masculinity without addressing femininity and women. And often, women are the victims of our toxic masculinity,” said Ieremia. “To have that discussion without women would have been wrong.”

Ieremia also looked deeper into the history and tradition, widely held stereotypes, and ritual practices of his Pacific Islander and Samoan culture.

“There is very, very much this idea of patterns, and patterns repeating. The way we continually perpetuate behaviors, not just as individuals or families, but as wider groups of people,” said Ieremia.

William Ming Liu, chair of UMD's College of Education and editor of “Psychology of Men and Masculinities,” led the ACTnow forum and saw excerpts from “Crying Men.”

“I’ve seen other modern dance that I’ve felt very disconnected from,” said Liu. Watching this, I saw very culturally familiar elements, so I felt much more connected to it.”

Students at the ACTnow forum also commented on what resonated with them about “Crying Men” and Ieremia’s choreographic research.

“Not something I would have wanted to miss. It was definitely a unique experience,” said an undergraduate student from Kerala, India, who asked to remain anonymous. “From my hometown the cultural dance really expresses [our] lives. I could really relate to that in this company’s performance.”

“The thing that I really appreciated about this was the honesty and vulnerability of the artistic director. He was willing to engage with the tricky thing of talking about your culture,” said Eunice Braimoh, a sophomore English major.

“Wanting to honor tradition, but also recognizing that there is a need for change...that tradition can be toxic...it is important to address that,” said Braimoh.

For more about Black Grace: http://www.blackgrace.co.nz

Masculinity and Indigeneity: A Movement Toward Change In AAPI Cultures

This event was “the first in a new series” at The Clarice, said Jane Hirshberg, Assistant Director of Campus and Community Engagement at The Clarice. Through moderated discussion forums, ACTnow introduces UMD students and community members to The Clarice’s 2019-20 visiting artists, and the central, thought provoking issues of their work.

The conversation on Monday, Oct. 21 was led by William Ming Liu, chair of UMD's College of Education and editor of Psychology of Men and Masculinities, with Neil Ieremia, Black Grace Founder and Artistic Director.

The forum centered around toxic masculinity, the central theme of the company’s work “Crying Men.”

For more about the ACTnow series, check out: https://theclarice.umd.edu/series/2019-2020-actnow