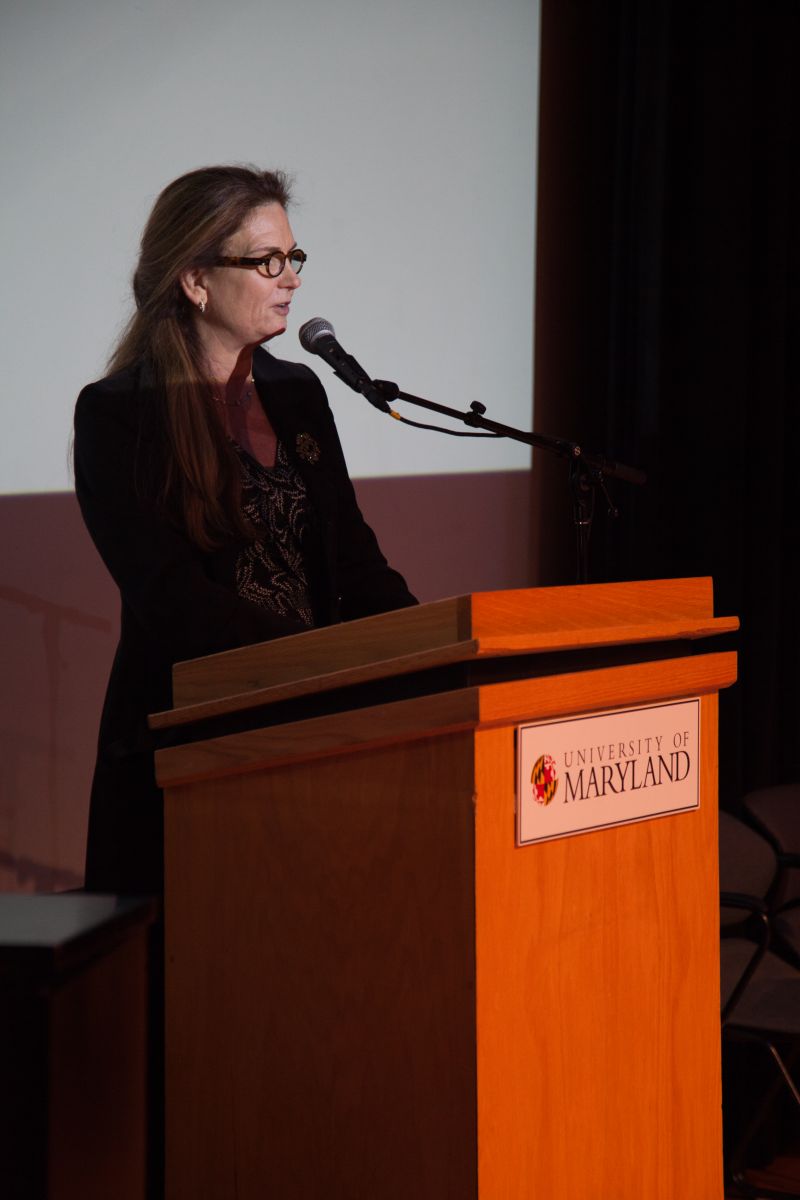 On Friday, February 10 we celebrated Randy Lord and Steve Fessler’s generous gift to the UMD School of Theatre, Dance, and Performance Studies (TDPS).

On Friday, February 10 we celebrated Randy Lord and Steve Fessler’s generous gift to the UMD School of Theatre, Dance, and Performance Studies (TDPS). Last fall, we announced that Randy--a 1977 graduate of what was then called the Speech & Dramatic Arts program--and his husband Steve committed to endow a graduate assistantship in theatre. The reception was an opportunity for TDPS faculty, students, staff and alumni to meet Randy and Steve and thank them in person for their generosity. Campus leadership, including UMD President Loh and Mrs. Loh, Provost Mary Ann Rankin and College of Arts and Humanities’ (ARHU) Dean Bonnie Thornton Dill were present to thank the donors for their generous commitment.

The evening began with TDPS’ season opener “The Importance of Being Earnest,” a delightful production of Oscar Wilde’s classic comedy on manners. After the show, guests gathered in the Cafritz Foundation Theatre for food, drinks and entertainment. Theatre major and Creative and Performing Arts (CAPA) scholar Erin Valade opened the reception with a welcoming song, Duke Ellington’s “Hit Me With A Hot Note.” TDPS Director Leigh Wilson Smiley made introductory remarks and welcomed Randy and Steve and fellow classmates back to the university, and Dean Thornton Dill followed with a speech about the importance of the performing arts at Maryland and the role of our alumni in making many creative initiatives and learning opportunities possible for students. She then publically thanked Randy and Steve on behalf of the campus community.

Randy took the podium to offer remarks about his and Steve’s decision to give to TDPS, highlighting their lifelong commitment to the performing arts and their desire to give the “gift of goosebumps”--that is, to allow young students to follow their passion for the arts. They quoted President Loh’s recent statement to the UMD community about the campus commitment to remain true to its core values of freedom of expression, respect, diversity and inclusion, and openness. “It is because of this commitment,” Randy said, that he and Steve feel so confident in their decision to give to UMD. Happy in their choices, they are able to say, “We’re glad we did,” and not, “We wish we had.”

The reception ended with an emotional performance of “Proud of Your Boy” from Aladdin by CAPA scholar Montana Monardes. A slideshow of photographs from Randy and Steve’s past acted as a backdrop during the performance, showing Randy on the UMD stage in the 1975 production of “Wizard of Id” and in other local theatre productions during his undergraduate years. The photographs demonstrated Randy and Steve’s long and deeply rooted commitment to the performing arts, and to each other, over the past 34 years.

Montana Monardes sings against a slideshow backdrop / Photo by Geoff Sheil, The Clarice

After the performances, guests mingled over food and drinks. A group of alumni from Randy’s 1977 cohort came back to campus for the event--the excitement of reuniting with old friends was palpable. It was a beautiful and heartening event, and we were thrilled to welcome Randy and Steve back to UMD and show them our deep appreciation.

Steve and Randy with Randy’s classmate and friend Patricia Hammer, reuniting after 38 years!