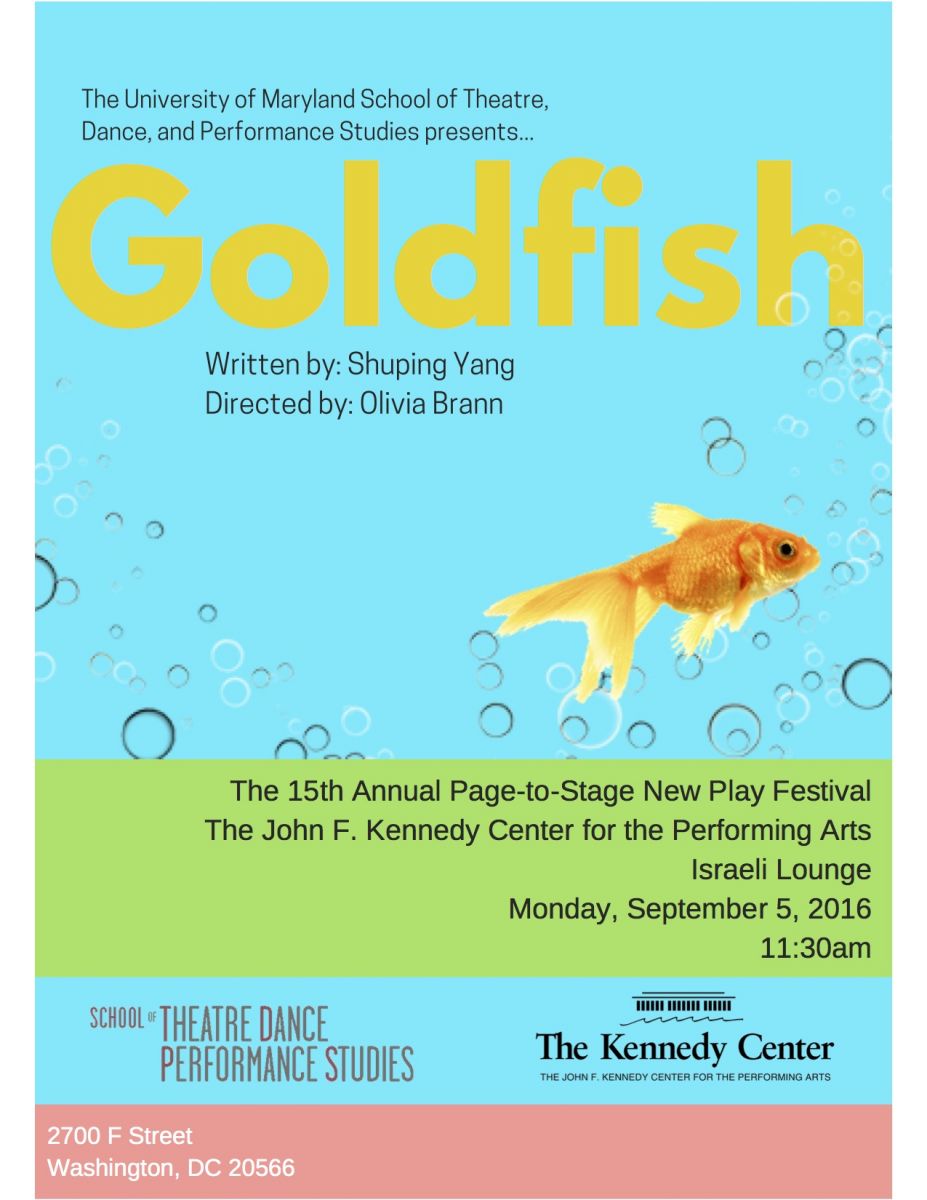 The Kennedy Center is now in the 15th year of its annual festival dedicated to bringing the DC theatre community together under one roof to celebrate the creators of and the people who love new plays. The Kennedy Center hosts more than 50 D.C.-area theater companies in a series of free readings and open rehearsals of plays and musicals being developed by local, regional, and national playwrights, librettists, and composers. The roster of performances envelopes a range of topics, including the Black Lives Matter movement and the LGBT community to famed and fabled historic figures, children's plays, and romance and relationships in the 21st century.

The festival will take place on Saturday, September 3 and Monday, September 5. Limited seating available on a first-come, first-served basis. General admission seating opens approximately 30 minutes prior to each event. No free parking for free events.

Goldfish explores the theme of love and family setting in a one-child household in contemporary China. The play features the family relationship of Xiao-Zhong, a young governor who follows his mother's will, even for marriage with Ya-Ting. Two days before the wedding, Xiao-Zhong decides to contact his cousin Yi, whom his mother has forbid him to see. Yi, who has been studying abroad, pays him an unexpected visit and asks him for help validating his forged college certificate. Xiao-Zhong helps Li Yi, while Ya-Ting warns him to stay away from Yi. However, an anonymous post about Yi's illegal act puts Yi in danger of being prosecuted. Will Xiao-Zhong go against his mother and wife to help his cousin? Will he succeed in fixing the relationship with his "brother"? The play goes further into illustrating the tension between Xiao-Zhong's realization of individual freedom and the entrenched morality. Followed by post-performance discussion. Drama. Recommended for age 13 and up. 60 min. + PPD

This piece explores what it means to be an African American woman in the 21st century, addressing the deep-seated issues these women face. Followed by post-performance discussion. Drama. Recommended for age 13 and up. 30 min. + PPD

​​​Brett, a thriving Hollywood actress, returns to her hometown to wreak the most horrific kind of revenge. A dark comedy where the American dream meets the American nightmare. Followed by post-performance discussion. Drama/Comedy. Recommended for age 13 and up. 100 min. + PPD. South Opera Tier Lounge [LSMV]