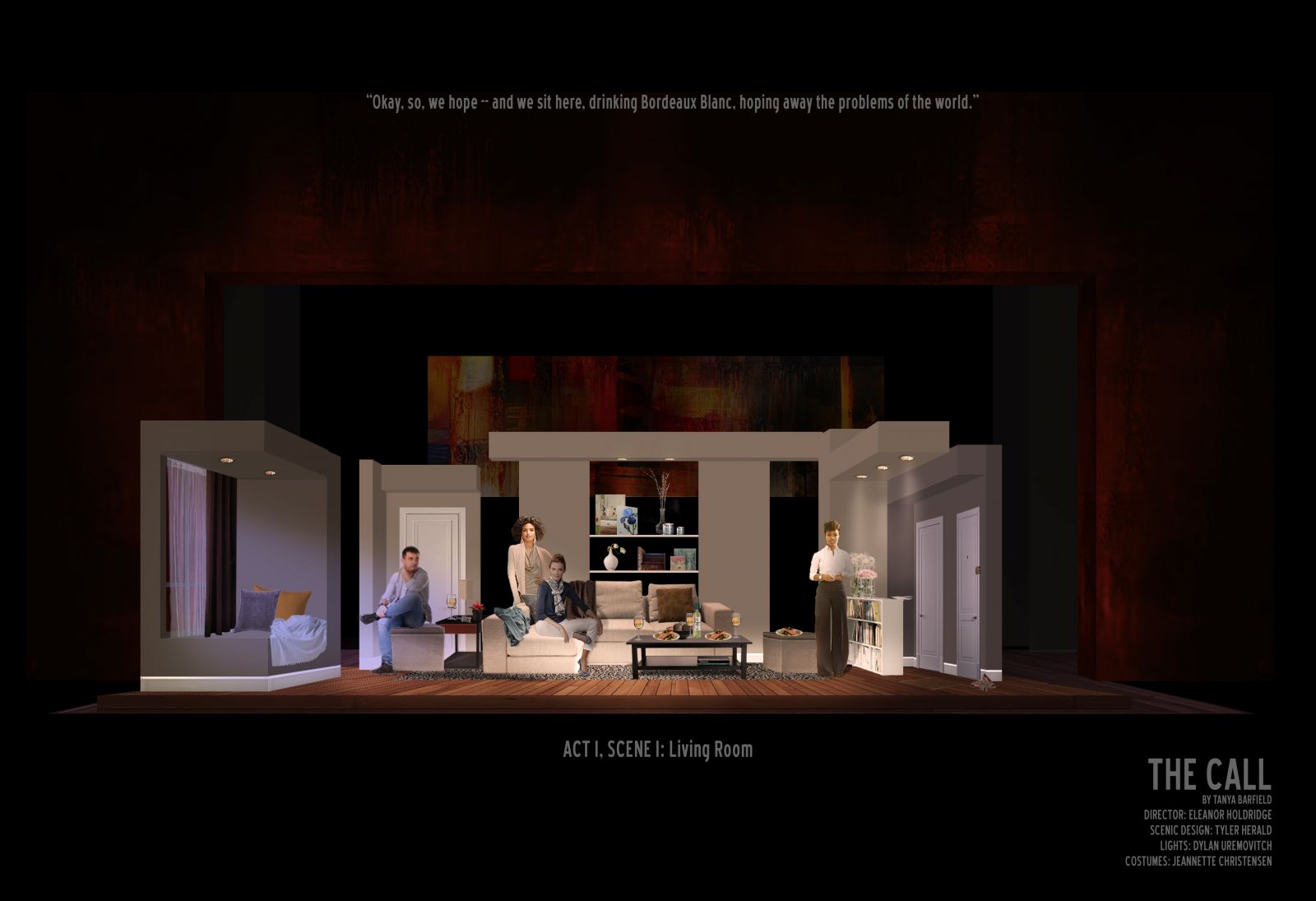 Second year TDPS MFA Design candidates Tyler Herald, Jeannette Christensen, and Dylan Uremovich will all have their designs featured in TDPS’s production of The Call, opening this weekend in the Kay Theatre at The Clarice.

Second year TDPS MFA Design candidates Tyler Herald, Jeannette Christensen, and Dylan Uremovich will all have their designs featured in TDPS’s production of The Call, opening this weekend in the Kay Theatre at The Clarice. Tanya Barfield’s 2013 play follows a couple, Annie and Peter, who set out to adopt a child from Africa, sparking tensions both within their marriage and with their friends.

Working on such a contemporary play has been an exciting challenge for the young designers. “It’s a story about real people on a very real subject,” said costume designer Christensen, who enjoyed the complexity of conceptualizing over two dozen looks for the realistic play. Similarly, Herald, the set designer, embraced his “inner interior designer” by designing his first interior set for this production. “It’s about this contrast between being perfect and something else,” he said.

The students design for main season shows as part of progress towards their degrees and it also provides them with valuable professional-level experience. “You learn a lot in the process of designing something and you learn even more when you see it up in real life,” said Herald.  “I feel so fortunate and so blessed to have this opportunity.”

While each of the students focus on different areas of design (Uremovich is a lighting designer), the trio found many opportunities to share their perspectives with each other to fully realize the world of the play with director Eleanor Holdridge. For example, while the play keeps the specific setting vague, the team worked together to determine their vision to set the play in Boston.

“Going into it, Tyler and I were instinctively on the same color palette … we were all collaborating,” said Christensen.  Herald added, “It’s our design …. We really work out between [Eleanor] and the other designers what the world is and where it’s headed.”

In the first rehearsal for The Call, Holdridge articulated that the play for her was about the question of communication. Similarly, for the three MFA Designers, the entire production process has been about communication and collaboration. Luckily for them, their offices are just down the hall from each other.

Though lighting designers and costume designers do not frequently work together, Christensen found it helpful to walk across the hall to Uremovich’s office to simply “pick his brain” about the play. “It’s nice to communicate more fully …. It’s so much better when you can meet face to face,” Uremovich said.

Sound designer Justin Schmitz—who graduated with his MFA from the University of North Carolina School of the Arts in 2015—has nostalgically watched the TDPS graduate students work, reflecting on his own recent experience as a graduate student. While he maintains that “no one can prepare you for the true life of an artist,” he has found in his early career that one skill is key. “[T]he biggest advice I could give to anyone: learn how to communicate well.”

In the week leading up to technical rehearsals, the excited message from the MFA candidates was clear: now the fun begins.

“All the tedious stuff is done and now I just get to paint all the beautiful sets and beautiful costumes and beautiful people,” said Uremovich, between adjusting lights. “I’m sure it will all come together beautifully.”

Christensen summed it up even more succinctly: “We’re just ready to get onstage.”