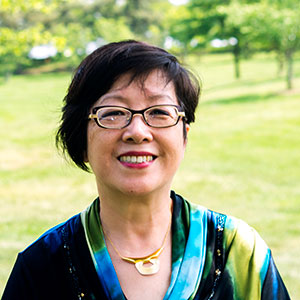 Helen Huang, Professor of Costume Design, is an award-winning costume designer who has worked in theatres throughout the DC area, across the country, and abroad.

Helen's design work was chosen for exhibit at the A. A. Bakhrushin Museum in Moscow, Russia.

Take Ten is an interview with Professor Huang published in theatreWashington. Click here to read.

Professor Huang was featured by the 2016 Oregon Shakespeare Festival for her costume design work on The Winter's Tale, directed by Desdemona Chiang and presented from an Asian/Asian-American perspective. See videos: Envisioning Sicilia & Bohemia and Humor, Poetry & Magic in the Designs of Helen Huang.

INTERNATIONAL: National Opera House of China, and the Central Television of China.

Helen Hayes Award and Ivey Award. Other credits: Costume design works in Exhibition “Curtain Call: Celebrating a Century of Women Designing for Live Performance,” New York Public Library, Lincoln Center; and the Prague Quadrennial. Teaching: professor of MFA Costume Design Program, University of Maryland, College Park.  This work has chosen for the international exhibit  Costume at the Turn of the Century at the A. A. Bakhrushin Museum in Moscow, Russia June/July 2015.