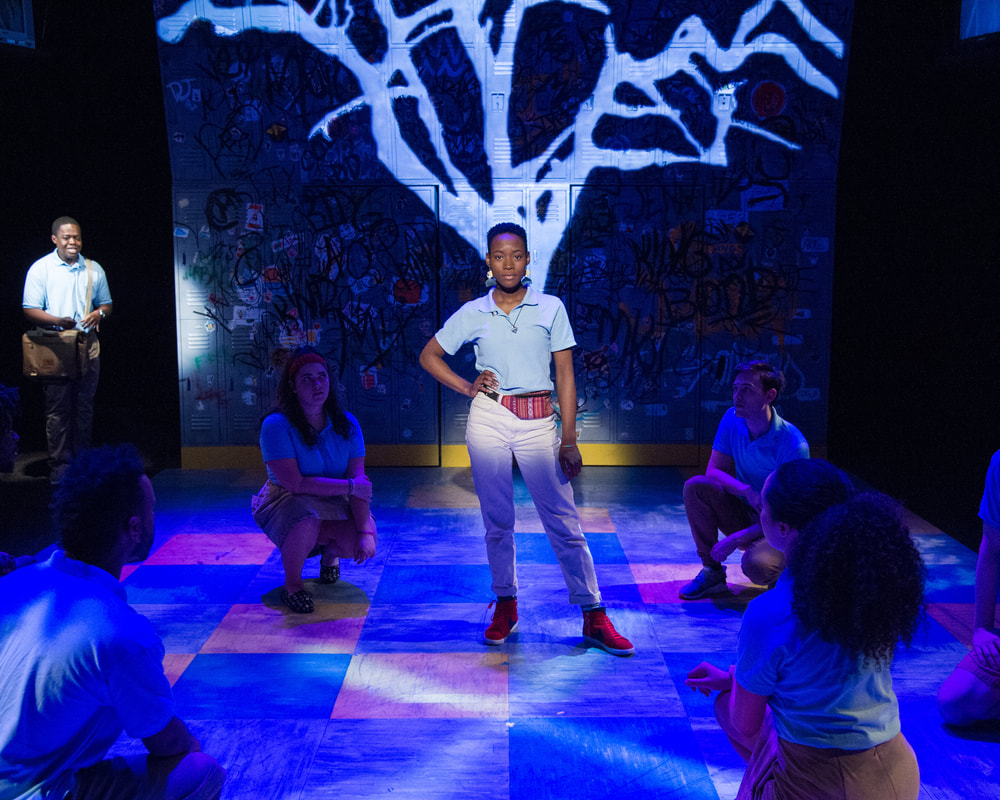 Alumni from the University of Maryland School of Theatre, Dance, and Performance Studies have won five 2020 Helen Hayes Awards, which honor work in local theatre. Due to COVID-19, this year’s awards were announced virtually over a two-week span in early September and culminated with a digital video celebration on September 25.

Among the awardees were M.F.A. design alumni Alberto Segarra ’15 and Kelly Colburn ’18, who won the Outstanding Lighting Design – Helen category for their collaborative work on Theater Alliance’s “Blood at the Root.” This was the first time since 1990 that people of color won the Helen Hayes lighting design award, and Colburn is one of three women to receive the award in its 35 year history.

In their work on Dominique Morisseau’s “Blood at the Root,” Colburn and Segarra combined their expertise in media, projections and lighting to build a visual environment to push forward the play’s storytelling. The play, inspired by the story of six black Louisiana high school students (known as the “Jena Six”) who were convicted of beating a white classmate in 2006, examines the connections between bias, justice and freedom in American society. Colburn, who is a media and projections designer, chose visual elements to highlight the complex intersectionality of the play’s characters and themes.

“The play deals with symbolic structures of racism,” she explained, “and I wanted audiences to see symbols on stage that would ‘burn’ into the eyeballs and create a memorable impact.”

In her acceptance speech, Colburn highlighted the need for further equity, diversity and inclusion in the D.C. theater community and called for “humility, love and respect” as the community works towards those goals.

Also among the awardees is Gary-Kayi Fletcher ’08, who won Outstanding Lead Performer in a Play – Hayes for his role as Ogun Size in “The Brothers Size” at 1st Stage. He is grateful for the people who have supported him in his professional career in theater, from his “Brothers Size” castmate and UMD classmate Thony Mena ’11 to professors like Scot Reese, Leigh Wilson Smiley and Walter Dallas, who passed away earlier this year.

“Walter Dallas saw something in me, and in so many other students, that he helped us see and activate in ourselves,” explained Fletcher. “In my work, I want to be a vessel for telling great, compelling stories that help people see themselves better.”

Congratulations to all of the TDPS alumni who won 2020 Helen Hayes Awards: