May 24, 2021 School of Theatre, Dance, and Performance Studies 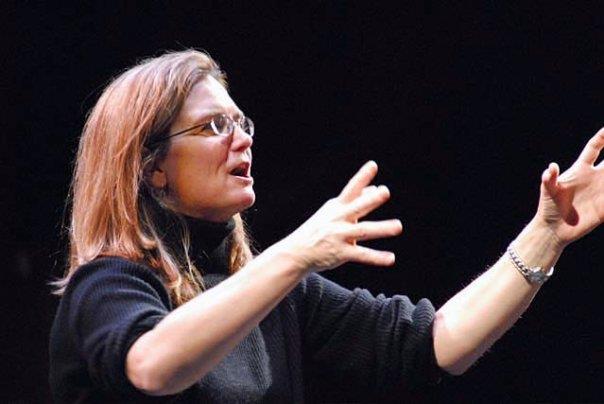 During her tenure, Leigh Wilson Smiley championed collaboration and equity and sought to amplify student voices at the School of Theatre, Dance, and Performance Studies.

Leigh Wilson Smiley, associate professor of theatre and former director of the School of Theatre, Dance, and Performance Studies (TDPS), will retire from the University of Maryland, effective on June 5, 2021. Smiley started teaching at UMD in 2003 and served as TDPS director from 2013–20. She plans to continue teaching and working professionally as a director and actor.

“I have loved working with students at UMD, and I’m so proud to see how they blossom after  graduating,” she said.

At UMD, Smiley taught voice for the actor, speech and dialects and acting. She is a designated Linklater voice teacher, trained by her mentor Kristin Linklater (1936-2020), whose book “Freeing the Natural Voice” describes techniques that use imagery to improve performance and everyday communication. Smiley has worked as a vocal coach with actors, educators and other professionals throughout the Washington, D.C., and Los Angeles areas, and internationally in countries such as Wales and Greece.

As the director of TDPS, Smiley sought to establish a culture of equity and transparency. She focused on collaboration—not only artistic and scholarly collaboration across the areas of theatre, dance, design and performance studies, but also administrative collaboration to create a more unified school. This synergistic approach contributed to the creation of the International Program for Creative Collaboration and Research (IPCCR) in 2017 and the recently announced Maya Brin Institute for New Performance, raising the national and international profile of the school.

Professor Frank Hildy said Smiley’s “inspired leadership has at its base a deep caring for the individuals she works with.”

“She set the tone that has made TDPS one of the premier performing arts institutions in the country and one in which people want to show up for work every day,” he said.

“She is passionate about teaching and helping students find their voices,” Huang said.

Smiley is currently working with Black alumni of TDPS who live and work around the country to train them to be certified Linklater vocal teachers.

“I see a real need for more diverse representation in theater, and especially voice training,” she said. “This work is about giving these professionals the tools to literally amplify their voices and those of their communities.”

While TDPS director, Smiley led the school’s participation in the Big 10 Theatre Conference and their New Play Initiative to produce plays by women playwrights of color, including Kirsten Greenidge’s “Baltimore” and Naomi Iizuka’s “Good Kids.”

Additionally, Smiley created the Board of Visitors and developed relationships with alumni donors, taking into consideration how their legacies would be honored by the school. She fostered alumni connections by hosting reunions and networking events in Washington, D.C., New York City and Los Angeles. She also worked to expand the study of puppetry with support from the Henson family—Jim Henson ’60 and Jane Henson ’55 both graduated from the University of Maryland. TDPS created the annual Henson Awards Showcase, supported by the Jim Henson Fund for Puppetry, and Smiley also worked with the Henson family to bring puppetry artists from around the world to work with students each year.

“Leigh has demonstrated leadership with confidence and collaboration, warmth and passion, backed up by determination and intelligence,” said current TDPS director Maura Keefe.

In retirement, Smiley will write a book about her work with voice archetypes, based on psychologist Carl Jung’s notion of archetype in his theory of personality and the human psyche. This research investigates how actors—and anyone in a public speaking role—can expand the breadth of their repertoire by tapping into various parts of their unconscious to discover new forms of expression. She will also continue work on her Visual Accent Dialect Archive (VADA), a video archive of English language accents, dialects and sound pronunciations from around the world.

“I’m looking forward to devoting myself to this work,” she said. “And I plan to travel and spend more time with my mom.”